Part 2 of this experiment goes into a bit more detail of the Skeletal Warrior 53(9) and Pale Maiden 54(22) mix I had done with my friend Kayla. We had ended up with 2 Skeletal Warriors now called the Spike twins ;)Both came with a pedigree of 54(0). 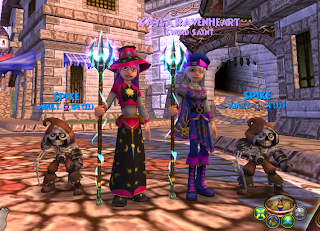 At adults they ended with a pedigree of 54(11) both had same talents and derby skills so It did not matter what we fed them to both get same as I was only feeding items that he just ate(not liked) to bring up stats I did this to see if there would be a differance( Now if you pet likes or loves the treat he does give you extra points).Once both Spikes were adults we decided to mix them to see if the pedigree got higher seems to be same new pet hatched today we named them both Isabella. 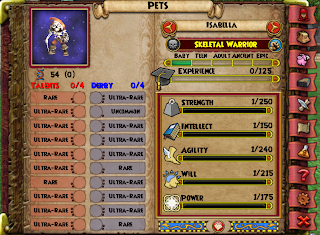 After the Isabellas grow into adults we will see if talents and derby are still same, although I have a feeling they will be I will be feeding only foods the pet likes or loves this time.
Now I have a new pet Ianthine Spectre Now this pets stats are 58(0) at baby Kayla said wonder what would happen after this pet is adult if we mixed it with one of the Skeletal Warriors (spikes) would it get a higher stat for warrior or would we get a Spectre with same or lower pedigree. So now I am off to make
Spectre an adult to mix with a Warrior pet. stay tuned to see what happens next 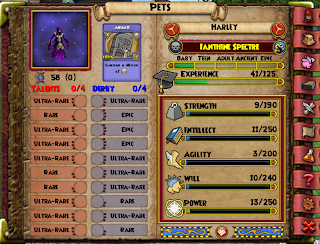 I would like to hear from you What mixes have you tried and what stats did you get?
until next time. Happy pet farming.