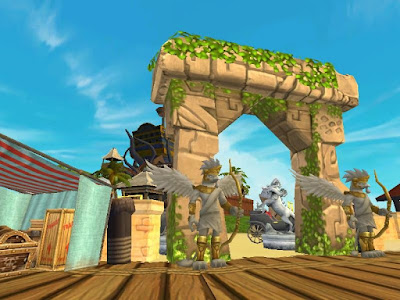 Welcome to Cautious Carlos's Castaway Cove. This house once a fortress left over from the Skull Island colonial wars has now become a safe heavens for rebels and scalawags. Carlos bought this property and turned it into a hotel Musketeer Island although you can still see parts of the older fortress. 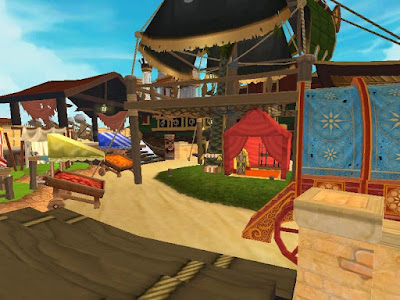 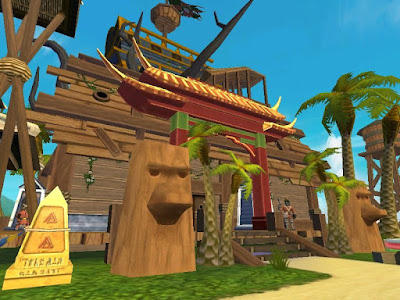 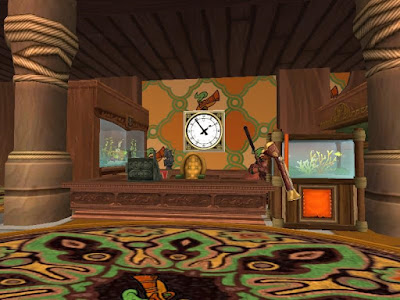 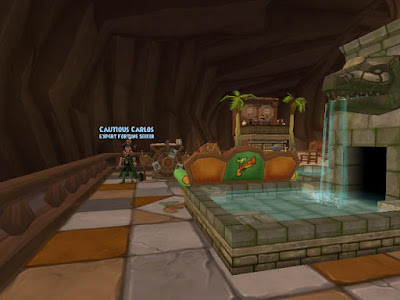 Carlos's favorite area is his dining hall. This area is made special for social gatherings and entertaining the hotel guest. Carlos waits for his guests to arrive. Please wait at the root beer bar to be seated. 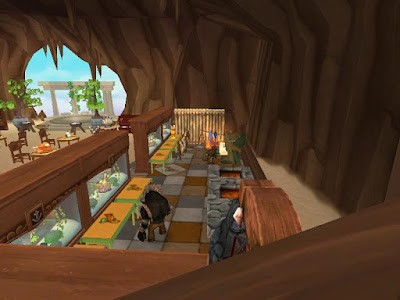 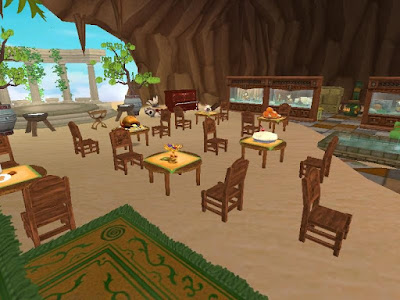 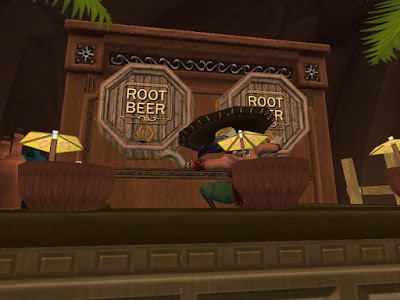 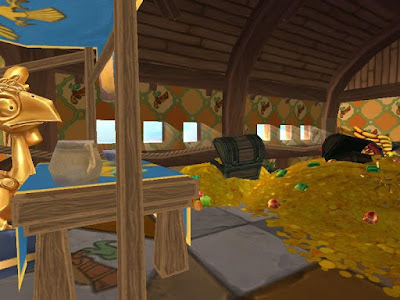 My favorite room is Carlo's gift shop. I can see pirates rummaging for that perfect gift to take home with them. Anybody got a hook I can use? I can picture a claw game here. 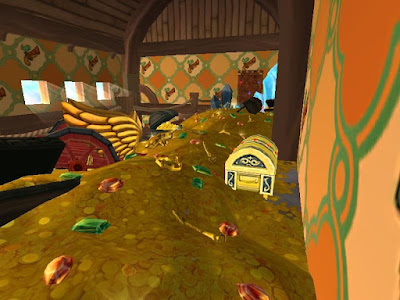 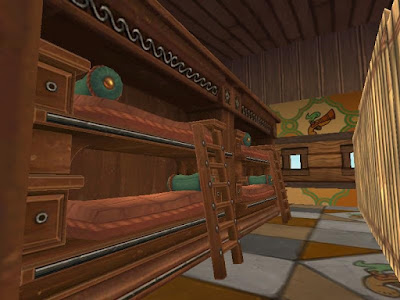 Posted by Paige MoonShade at 5:00 AM No comments:

Congratulations, as always Wizard Players came out in force with some of the most amazing dorms we judges have seen. Without further waiting here are your winners! 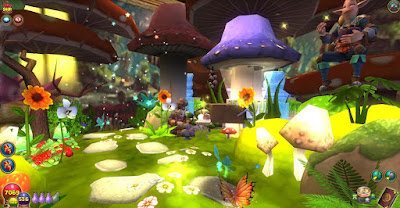 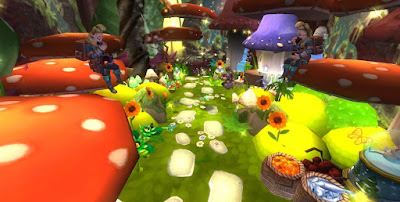 The Mystical Mush-Room
SPLAT! A young wizard by the name of Brooke Sprite shield, falls from the sky and hits the ground through a bright vortex that had seemingly appeared out of nowhere! She gasps for air and collects herself as she had just taken immense impact. Luckily, by the power of her healing magic she was able to tend to her injuries. She stands up and looks around to see that she had fallen into an unfamiliar habitat of...mushrooms?? After a rather unsuccessful battle with the old cob, she had been whisked away into an unknown land, banished from his sight. She wanders further into the forest-like village, bewildered at the multitude of fungi homes. As she trudged along the mysterious road, she was met with a small green leprechaun! She flagged the creature down and frantically told him of her tragic situation. The little man seemed to shudder at the sound of old cob's name and continued to explain that she had actually stumbled upon the hidden sanctuary of leprechauns! The little man pulled her along to a dark and ominous entrance of a cave...where could it possibly lead to? Frightened yet curious she let her legs pull her along and slowly opened her eyes.  Her eyes were catching such vibrant colors and creatures she'd never seen before! There were colorful mushrooms of all shapes and sizes growing without limit! Flabbergasted, she stumbles back, catching her balance for she had just entered the mystical mush-room!

The selected five items mandated for this creative fun little project was definitely a challenge to incorporate into a dorm idea. Alas, a story was formed and each and every item found a purpose and its place! First off, we had the dead briar tree in which luckily was the easiest to find its home given the natural habitat it was already in! Secondly, the folding stool came to play as a picnic table for one of the gluttonous magical creatures residing in the mystical mush-room that carries her ice cream sundae that she just can't get enough of. Thirdly, we have the lovely hanging onions which was definitely the most challenging, but later found its place as a wind chime for the toadstool house! Fourthly, the star chalice ties in with the hanging onions both serving purpose for the mushroom home as a brilliant light source that can be seen from a mile away as well as mimicking the sound of a wind chime. Lastly, i had chosen the butterfly wings as the choice of mount and shrunk multiple of them to the size of realistic ones to add movement to the room along with the fairy-flies without the feeling of cluster, that constantly supply the room with the magical pollen needed to stay flourishing! 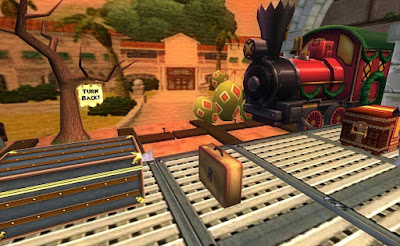 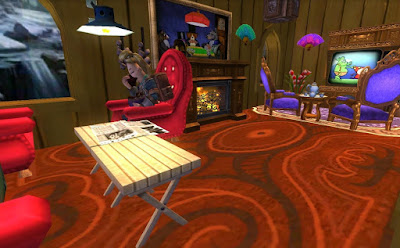 Internship
So how did I end up here you are wondering? The dusty flat lands of Monquista don't really scream glamorous summer internship do they? Well as it happens failing to sort colors before one does Cyrus Drake's laundry gets you a one way ticket to 2 months as an organ grinder for a monkey named, Gortez. I happened to think pink was a very flattering color for Professor Drake but he did not agree so when it came time to hand out summer internships he was still holding a grudge. So long beaches and nice weather! So long fun! He has gone out of his way to make the journey as miserable as possible. While normally we travel by world gates unfortunately Monquista is a bit behind on technology and instead I will have to travel 13 days by spiral train. I promised to write my friends a postcard to let them know I survived. Wish me luck, I need to make enough for my ticket back home. Now to find this cute little monkey I get to make dance all summer. Here monkey, monkey, monkey!

To My Friends: Note to all never make Professor Drake mad!   After you guys left me on the platform I finally found the “help” desk. (Star Chalice) You'd think with big shining stars the guy working would have a clue, but he couldn't even point me in the right direction for my train (Mount), then I got tangled with one of those Azteca Doomsday prophets. I barely made it. Afterwards it was 13 days in a coach seat across from the hungriest Alphoi I have ever met. She ate everything, cakes, turkey legs, even raw onions.(Hanging Onion)  YUCK. I barely survived the smell. It was 13 days of catching peeks of the same cartoon play endlessly in the first class cabin. 13 days of smelly travelers, and sleeping upright. The seats in coach are so crowded there is barely any leg room at all. We were all trying to weave around the one table (Folding Stool) we have just to stretch our legs. But after nearly 2 weeks we have finally made it! Nothing says welcome like a large sign hanging from a dead tree (Leaf Bare Tree) that reads “Turn Back.” Yup, this will be a great summer internship. Ugh! Xoxo ~ Calamity PixieShade    P.S. Gortez is not a little monkey, and organ grinding is not playing music. Send Help!